The following project looks to combine the social and physical repercussions of both the Celtic Tiger boom and collapse of the Irish housing market to create a new residential/agricultural typology.

As construction boomed in Ireland during the late 90’s and early 00’s, a generation of young Irish left their family farms, and Ireland’s agrarian history, to work in construction where pay and opportunities were greater.  Enrolment into agricultural schools dropped, and knowledge transfer on family farms was reduced.  With the collapse of the housing market in 2008, Ireland was left with a large population of ex-construction workers with little agricultural knowledge and young families to support.  The collapse also halted the construction of thousands of the residential estates, being constructed on the peripheries of small towns and cities, which are adjacent to and often surrounded by farmland.  The estates contain an average of 15 houses in various states of habitation and construction; occupied, vacant, almost finished, enclosure completed, structure going up, services only, and planned.  In addition, agriculture schools around the country now appear to be over capacity.

As some of these houses begin to be purchased, at highly reduced costs, the trend is for them to be bought by young families who are familiar with the area and understand its value.  These are often the same people who left their family farms for construction, and are now looking for a new way of life.

This combination of social and physical remnants from the construction boom, and the noted potential to reduce Irelands food imports by 3 billion dollars (currently 5 billion) through increased local agriculture, provides an excellent base to radically rethink suburban Irish residential neighbourhoods. This project looks at one particular ghost estate and proposes the introduction of a permanent agricultural school in some of the incomplete buildings.  A rethinking of the organization of the estate and the yard sizes provides ample room for orchards, vineyards, berry bushes and shrubs to be incorporated into the estate.  Teaching spaces are created adjacent to the school for arborculture, horticulture and hydroculture.  All of the landscape is designed to support dual functions for both the residents and the school.  For example the hydroculture area provides growing containers for the school, which would grow plants to clean the water while doubling as docks and access to the natural swimming pool that is created. 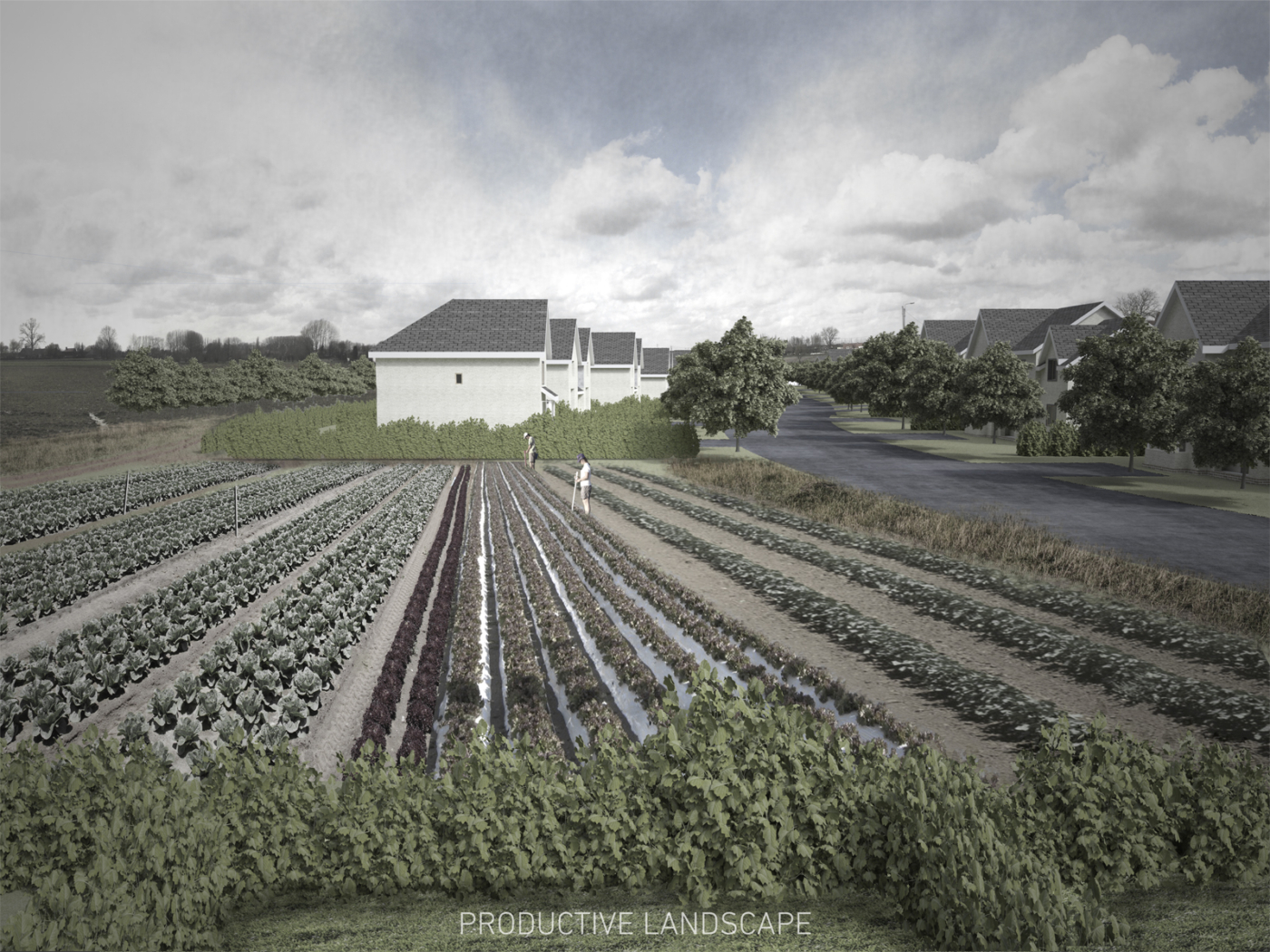 All landscaping maintenance in the estate would be provided by the school and its students, while profits from the agricultural produce harvested would be split between the school and the residential owners. 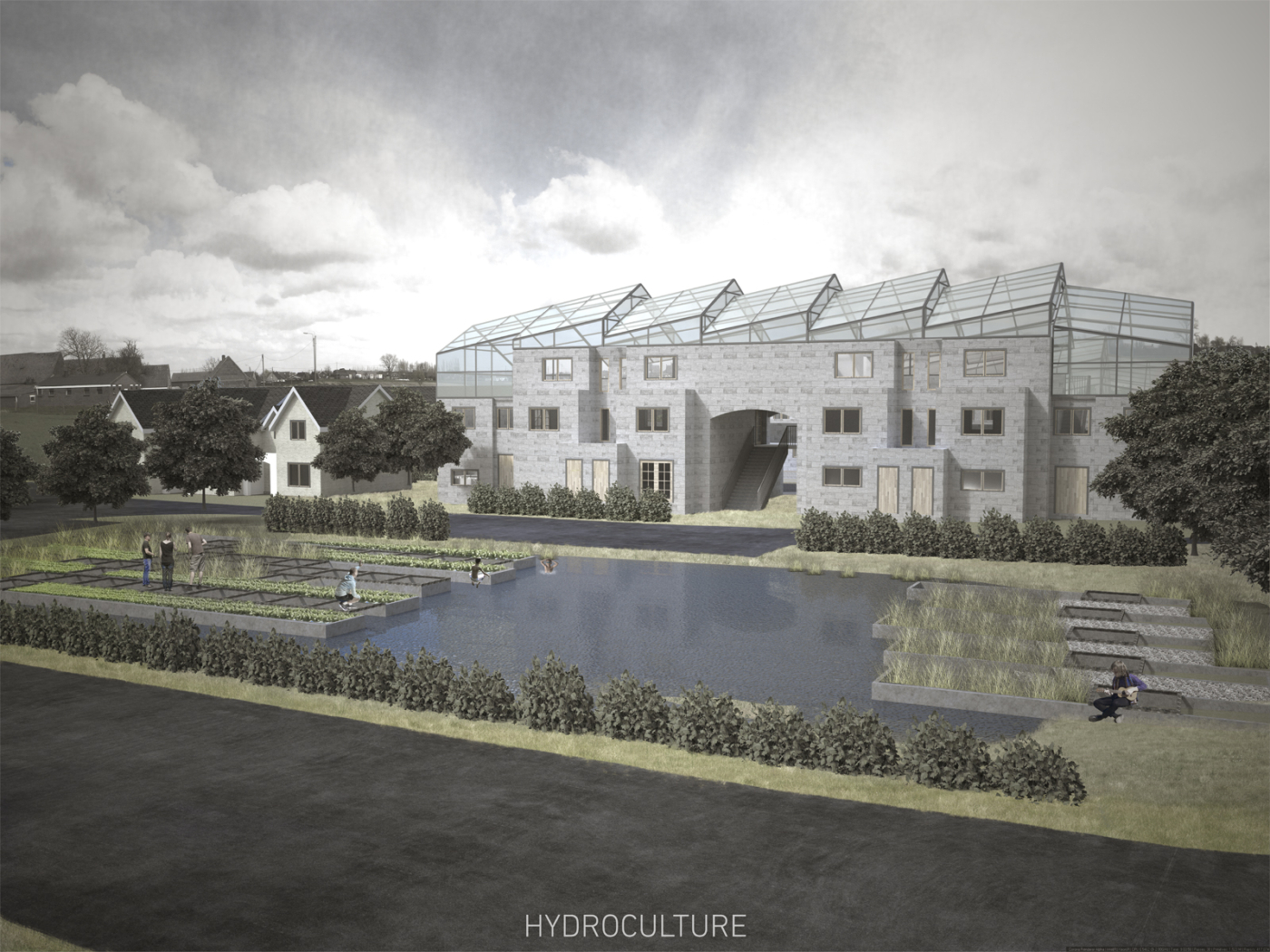 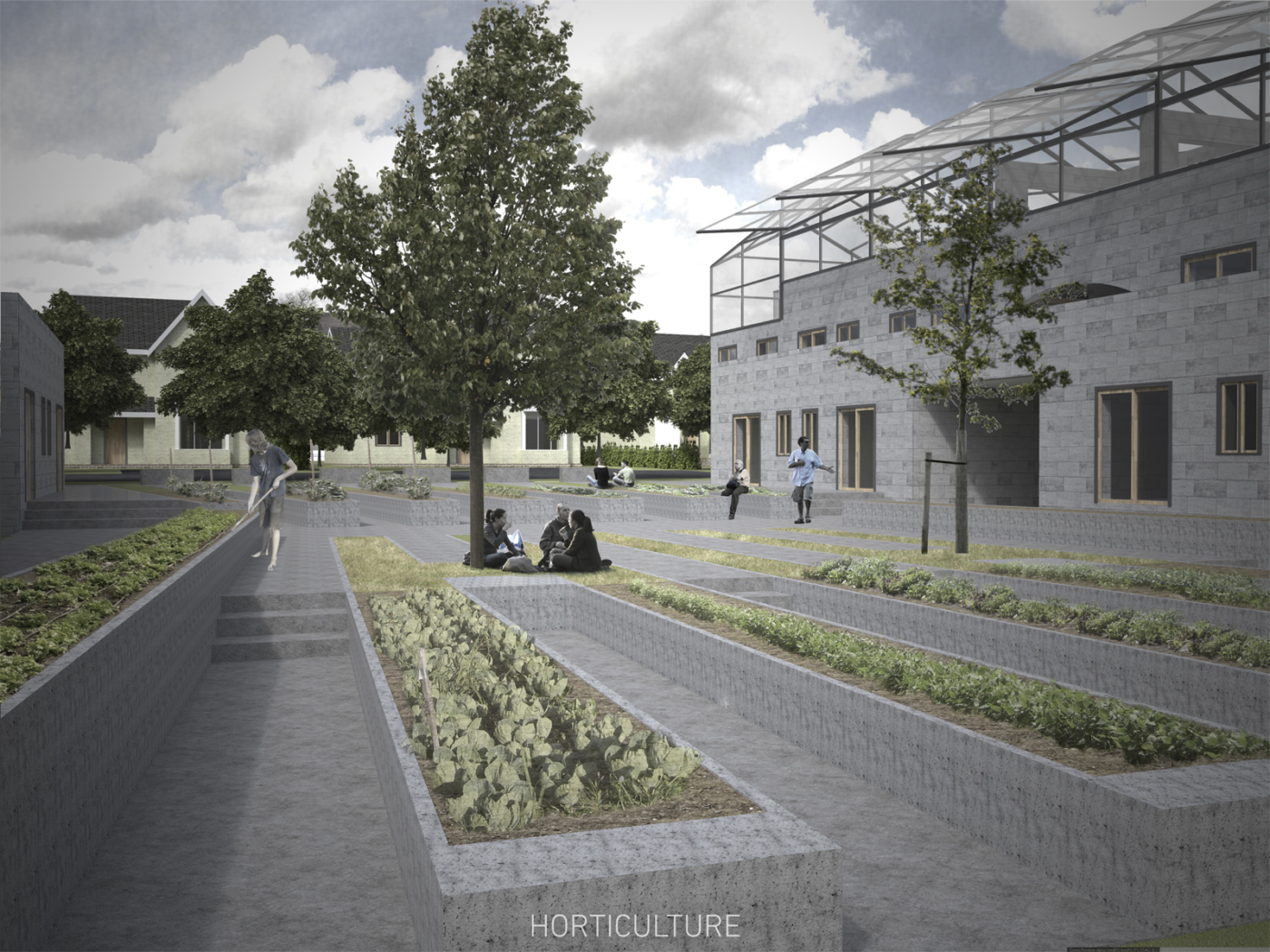 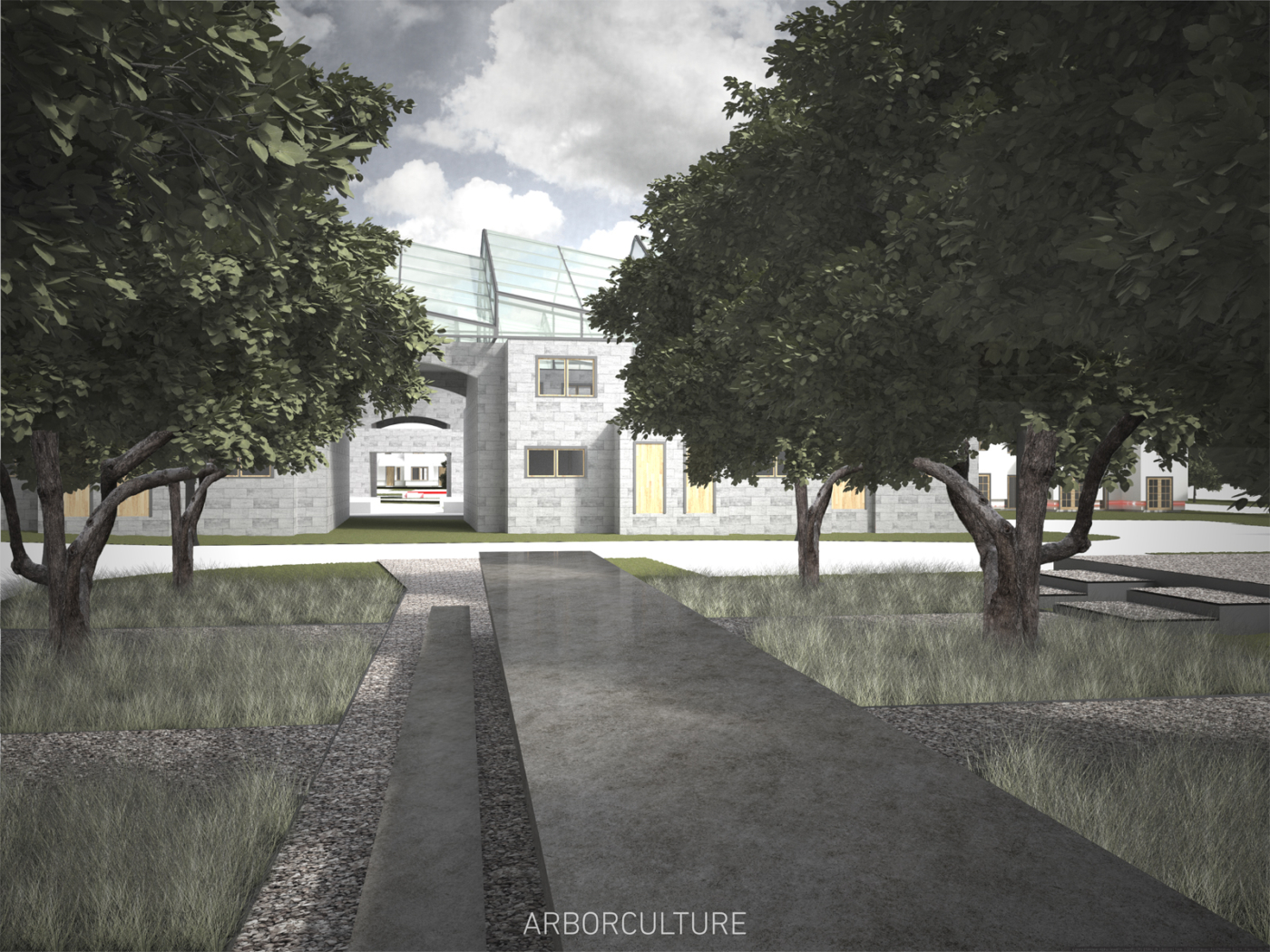 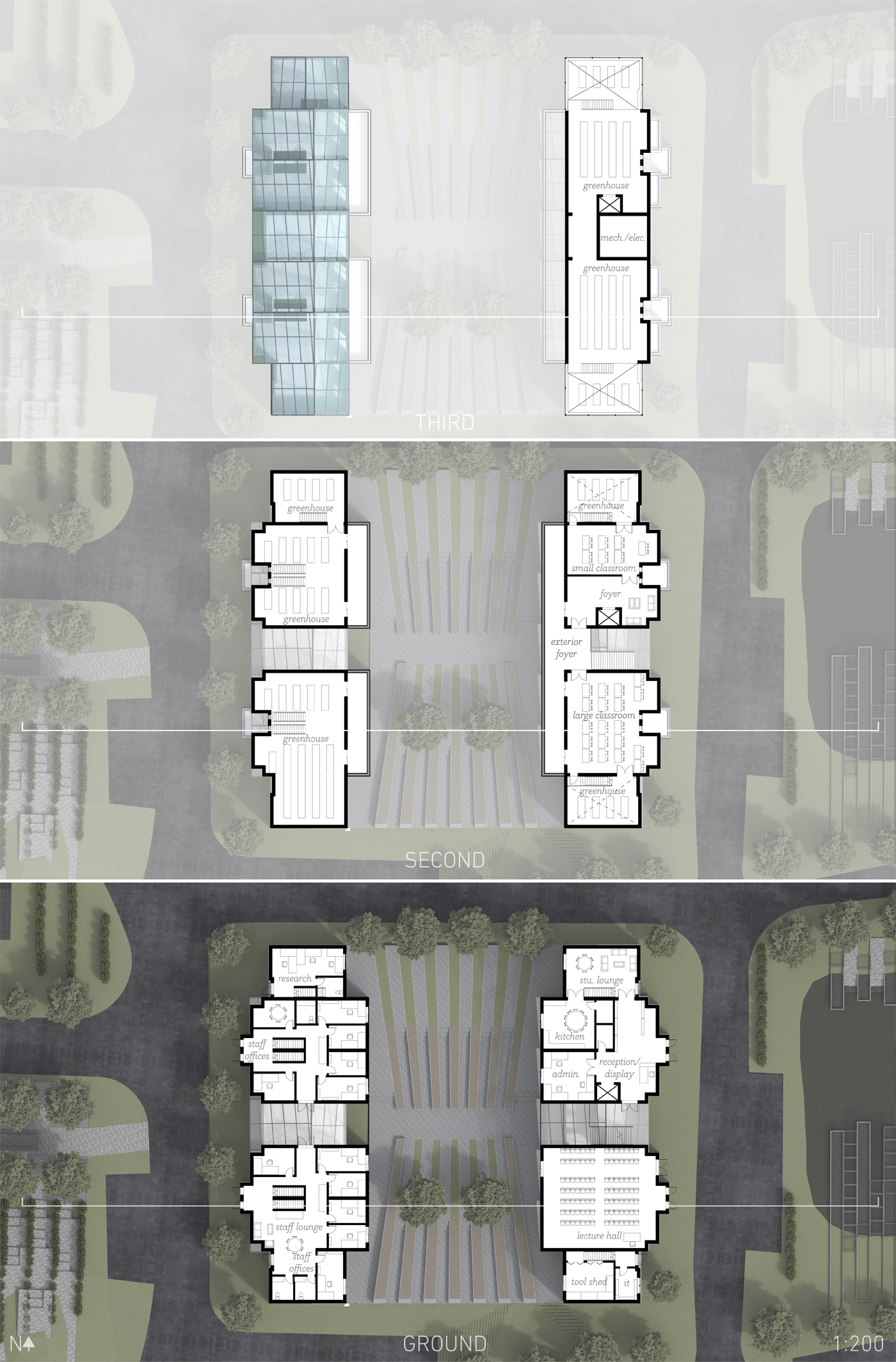